Round table: The new literary geographies

Stylist, philanthropist and art collector agnès b. has promoted artistic creation under all its forms, the environment and solidarity for many years.

“La Fab.” aims at bringing all these activities together under one single roof.

Launched on February 1st, 2020, La Fab. presented a first exhibition entitled “La hardiesse” (The boldness), which agnès, as a galerist since 1983, curated with the help of the historical team of galerie du jour.

La Fab. also includes “la galerie du jour”, which becomes a kind of house where everything is for sale: paintings, sculptures, photographs, some furniture … agnès finds herself “ensemblière” as she likes to say.

“La librairie du jour” is a bookstore where publishers are invited to contribute to the selection and presentation of works on display. A program of signing, conferences and artist meetings is organized on a regular basis within the bookshop. Le point d’ironie is distributed here.

Finally, La Fab. spotlights the social and humanitarian actions supported by fonds de dotation agnès b., as well as agnès’s environmental activism, carried out among others by Fondation Tara Océan.

In 1984, agnès and Jean-René de Fleurieu launched “la galerie du jour”, a stone’s throw from the first boutique agnès b. rue du jour, which opened in 1976, and opposite the “hole of Les Halles”, the recently demolished wholesale food market in Paris. “La librairie Christian Bourgois” is created right next to la galerie du jour. In the bookstore, all the books were laid on the same table, the famous table that we owe to Les Jambons français, the former residents of the venue and that will be installed in La Fab.’s bookstore.

In 1997, Jean Fournier called agnès to ask her: “Shouldn’t you move to my former gallery? They had been friends since agnès had interned in his gallery located avenue Kléber, at the age of 17. La galerie du jour then moved to rue Quincampoix.

That same year, while having dinner at Lipp with artist Christian Boltanski and curator Hans Ulrich Obrist, agnès b. launched le point d’ironie. This “hybrid periodical” offers an artist the opportunity to make this medium his own and bring it up to a singular work of art. The first edition of le point d’ironie was published for le Festival de Cannes. This manifesto for independent cinema was designed by Jonas Mekas, who sadly passed away in 2019. By means of its gratuitousness and produced by agnès, le point d’ironie series now comprises more than sixty issues.

At the same time, piece by piece, agnès built up her own art collection, which includes photographs, drawings, paintings, sculptures, installations, sound, videos and films.

In 2009, agnès decides to create fonds de dotation agnès b., one of the first funds created in France after the Economic Modernization Act was brought into law on August 4, 2008, with the aim of structuring the endeavors in philanthropy, patronage and sponsorship that she had personally supported over the last forty years or so.

In keeping with her desire to develop new venues in upcoming areas, agnès met with Jérôme Coumet, mayor of the 13th arrondissement of Paris, in 2017 and decided to open La Fab., at place Jean-Michel Basquiat, in a neighborhood enjoying a cultural and architectural revival. A new and young Paris with a dazzling future!

In 2018, la galerie du jour and la librairie du jour became itinerant, taking their program on the road prior to installation at La Fab., their brand new 1,400 sq. meter home designed by SOA Architectes, which opened in early 2020. I9n-between, two exhibitions featuring artists Carolyn Carlson and Elizabeth Daynes were organized at the headquarters of agnès b., while the Modernity of Passions exhibition – designed by the national school of photography students’- was based on the agnès b. collection and shown at the 2019 Rencontres d’Arles. 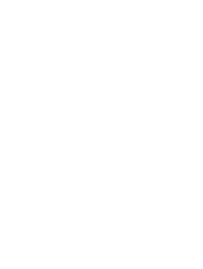 An exhibition space of

stairs in the main staircase 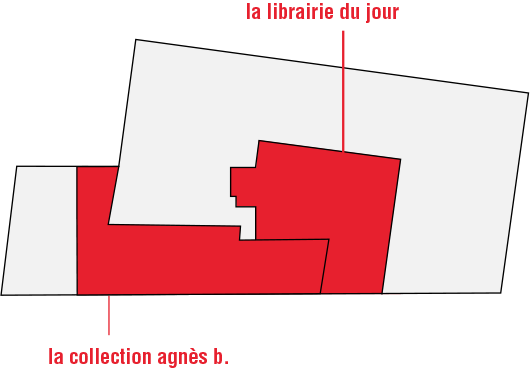 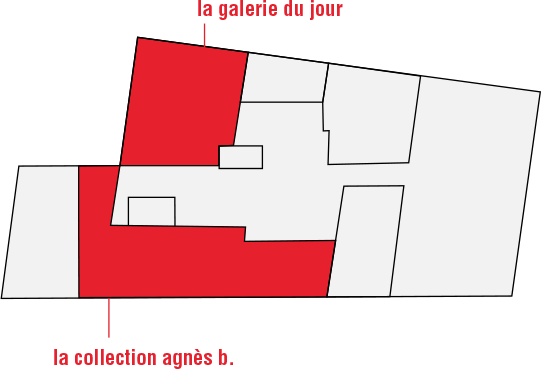